When Wired magazine blogger Chris Anderson first defined the term “long tail” in 2005, the initial idea was that the demand curve sloped down swiftly from the mainstream products at the head of the curve to the niche products at the end. 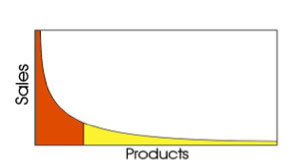 Over the past decade, “long tail” has been applied to all manner of businesses and makes sense in many ways when understanding the demand curve. Consider why Amazon.com looks like such a great way to illustrate the concept, particularly in light of a product release: Huge sales, for instance, for a new release movie on the front end of the curve, and less sales but niche demand as a product ages.

Consider this: News cycles behave the same way when it comes to the marketing of product launches.

We at Red Barn Media Group/Advanced Content® have noticed this in the case of our clients. Advertising and public relations can both be great for product releases. In the case of agricultural equipment, for instance, both are very effective. Agricultural equipment manufacturers often build PR campaigns around farm shows and show off the shiny new machines for farmers to peruse there; farmers might even get to drive new agricultural equipment there. It all builds tremendous excitement, drives lead generation and orders and makes everyone from sales executives to field dealers really happy. Advertising in trade magazines trumpet the release, reporters write stories about it.

Then it happens, slowly, over time. Stock remains on the shelf or the lot, the fervor dies down and—inevitably—the market forgets. The product is still every bit as viable in the marketplace… but what if a product just doesn’t have enough marketing support behind it after the initial excitement?

Brand journalism might be the best answer. Let us present a content marketing case study based on the release of one of our client’s products, the Massey Ferguson 9500 Series combine. When these new massive machines were first introduced, amid a flurry of positive PR and a new ad campaign, Red Barn Media Group produced the first in a long series of articles in Massey Ferguson’s brand journalism title, FarmLife magazine. This first piece introduced the product itself (“The New Standard”). The next issue featured an article that was focused on a specific feature of the new machine (“That’s Cool”). Six months after the hoopla around the launch, the machine was finally in the field long enough for customers to chime in, and FarmLife devoted a cover (http://www.onlinedigitalpubs.com/publication/?i=103166&p=1) and a cover story (“Through The Wringer”) to theses beasts. As far along as two summers later, FarmLife was still covering operations that were using the 9500 Series, which makes sense considering dealerships still had them on the lot and they were still a standard-bearer in their competitive set (“A Calling, Found”). All of these pieces were produced using Red Barn’s approach to disciplined content marketing, called Advanced Content. 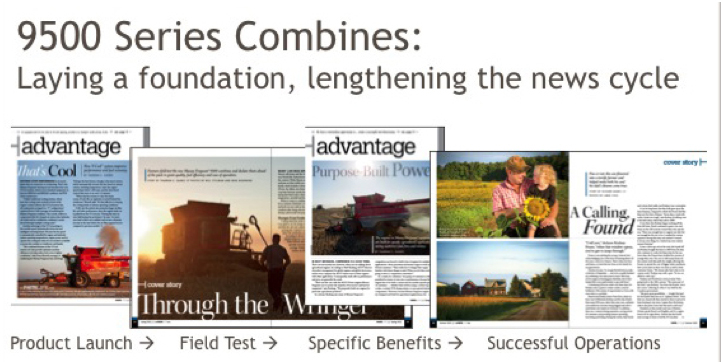 Meanwhile, credibility is the “cherry on top” for this approach. Notice how the first few articles heralding the release of this agricultural equipment tended to focus on the release itself, and then specific features, while sourcing corporate contributors (engineers, product managers, etc.). Next, as the product gets in the field and brand ambassadors get their hands on it, they can both “test” product and eventually make it a part of their day, even if it’s a $300,000 piece of farm equipment. In this case, you meet the farmer, you understand how credible he or she is based on knowledge and information they share on their operation, which lends credibility to a product endorsement. That goes way beyond the power and credibility of the testimonial, for instance, and all the while the news cycle for a product in the field is extended far beyond the initial rush of PR and advertising.